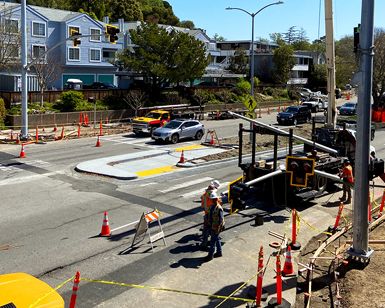 Pedestrian safety is being enhanced at several crosswalks along the Sir Francis Drake Boulevard corridor, including adding a High Intensity Activated Crosswalk, commonly known as a HAWK beacon.

The installation of the remaining Marin Water pipeline between Eliseo Drive and Highway 101 is underway but will take additional time to complete than originally anticipated. This is due to placement of underground storm drains and complications with removing the old water pipeline. Subsequently, the planned paving process for the 2.2-mile project corridor is being adjusted by one week to accommodate the water pipeline work. The grinding and paving operations for the first of the three work zones (Ross Terrace to Laurel Grove) is now slated to take place from June 7-17, with the work occurring during the daytime hours until switching to night work on June 13. The second work zone (Laurel Grove to El Portal) is planned for June 15-21 during nighttime work hours. The final zone (El Portal to Highway 101) is scheduled for night work from June 20 to July 2.

San Rafael, CA – The Upgrade the Drake project, which began construction almost a year ago along Sir Francis Drake Boulevard in Marin County, will start five weeks of night work on Sunday, May 23. The hours of operation will be Sunday nights through Friday mornings from 6 p.m. to 6 a.m. The construction timeline, which was presented in a virtual public meeting before work began, is on track to be completed this fall.

The night work entails completing the final segment of the Marin Water[External] pipeline, followed by roadway paving along the full 2.2-mile project corridor. The paving process will require grinding and removing the existing pavement prior to placing new pavement. By doing the work at night, both milestones can be completed more efficiently than it could be done during daytime hours, as well as avoiding the traffic disturbances related to daytime work.

Pedestrian safety is being enhanced at several crosswalks along the Sir Francis Drake Boulevard corridor, including adding a High Intensity Activated Crosswalk, commonly known as a HAWK beacon.

The paving work will be divided into three areas. The work will move from west to east starting from Ross’ southern town limit and heading toward Highway 101. The first work area will be Ross Terrace to Laurel Grove from June 1-8. The second area will be Laurel Grove to El Portal from June 6-13. The third will be El Portal to Highway 101 from June 9-25. Following the pavement installation, the roadway will be striped with lane lines and pavement marking.

In addition to the paving rehabilitation, the $18 million project has installed many safety enhancements along Sir Francis Drake Boulevard between Highway 101 and Ross Terrace. Since beginning construction in June 2020, multiple milestones have been reached and there are noticeable changes along the heavily traveled roadway.

To date the project has installed 6,834 feet of new Marin Water pipeline. Installation of the remaining 970 linear feet from Eliseo Drive to Highway 101 will begin May 23 and is expected to take three weeks to complete. The new water line, which is replacing 100-year-old pipe, will serve the community for decades to come.

All eight of the intersections targeted for improvements have been completed. This work has included lane configuration changes, new intersection layouts and upgrading the respective traffic signals. Additionally, several crosswalks have been addressed along the corridor, including adding a High Intensity Activated Crosswalk (commonly known as a HAWK beacon) at Ash Avenue, which is designed to provide push-button activated traffic control for pedestrian safety while still maintaining traffic flow the rest of the time.

With the drought declaration for Marin, DPW will support the conservation goal set by Marin Water during the water shortage emergency. The Upgrade the Drake project will delay new landscape planting until a later date, including project-related medians, neighborhood entries and similar gardening features. The project will proceed with installation of irrigation infrastructure and mulch in the median islands to support the existing trees and future landscaping, reducing the need for additional future work. The contractor will utilize recycled/reclaimed water on construction activities as required. By adhering to these regulations, the project team is striving to encourage residents to do their part by conserving water[External] effectively.

The design of the revised street lighting along Sir Francis Drake Boulevard is underway. The redesign was initiated after public concerns were heard primarily relating to the new lights installed on the roadway median islands. The redesign is intended to reduce unwanted light dispersal on adjacent properties and improve the light aesthetic while maintaining lighting uniformity levels necessary for safety. The project’s lighting team met with the Community Advisory Committee on April 15 to receive initial feedback. Another meeting with the advisory committee is being planned for June, followed by a virtual public meeting on Thursday, June 24. The public meeting will be held from 5:30 p.m. to 7 p.m. online[External]. Additional outreach for the public meeting will be made closer to the date.

Community members can learn about the project background, see project updates, and submit questions and comments on the project website[External]. The website also features a FAQ section[External] which covers various topics, including details on the street lighting. Those interested can sign up to receive regular project email updates through the website.