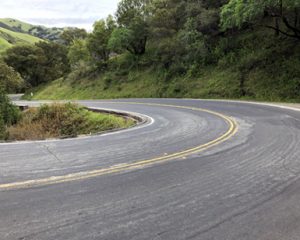 The curve realignment project on Lucas Valley Road at milepost 5.08, just east of Big Rock trailhead in West Marin, is slated to begin the week of June 28. Overseen by the Marin County Department of Public Works (DPW), the public safety improvement will significantly soften the sharp turn, which has been the site of several vehicle incidents over the years. Weather permitting, the project is expected to be completed in November.

Following the contractor bidding process that wrapped up in May, the project was greenlit for $1.6 million. The project is funded by a $1 million Federal Highway Safety Improvement Program (HSIP) grant and the County’s Road and Bridge Rehabilitation Fund.

It is anticipated that there will be traffic impacts throughout the project. Starting the first week of July, a couple hundred feet of the westbound lane of Lucas Valley Road will be closed. The lane closure through the project corridor will be in place for the duration of the project. All vehicles traveling through the work zone will be limited to single lane, alternating access, controlled by portable traffic signals at either end of the project limits.

Due to the physical constraints of the worksite, critical construction operations may require intermittent temporary road closures. These full closures could last from 30 minutes to four hours and would only be conducted during daytime work hours. DPW and the contractor will provide advance notice of any planned full closures and recommended detours. As per standard procedure, active emergency service vehicles will be allowed access.

For safety concerns, bicycles will be intermittently prohibited through the project zone. Notifications of closures for non-motorized traffic would be made in advance using signage along the roadway leading up to the construction area.

Lucas Valley Road is a key east-west connection from the highly populated Highway 101 corridor with more rural West Marin. In addition to passenger vehicles, the two-lane road is driven daily by trucks, often carrying agricultural supplies. Despite relatively low rates of speed on the twisting and hilly road, collision and incident rates are above average at the project location and, while the upcoming construction comes with unavoidable public inconvenience, the work provides a significant safety improvement.

To soften the sharp turn, a 135-foot-long retaining wall will be installed on the downhill side of the turn. The retaining wall will then allow for the road to be shifted east, resulting in a larger and less severe curve radius. The project also includes modifications to storm drain infrastructure and the installation of a safety barrier and guardrail.

While this improvement will make the curve more navigable for larger vehicles and on par with other curves along Lucas Valley Road, the current roadway restrictions pertaining to large trucks will remain in place. Trucks longer than 36 feet, such as “big rigs,” are not permitted to drive along the roadway, and the current signage stating the restriction will remain in place following the completion of the project.

Improving roadway conditions across unincorporated areas of Marin has been an ongoing commitment of the County for years and is one of the top priorities for the Board of Supervisors.