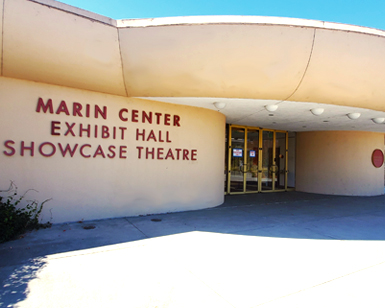 The $2 million project at Exhibit Hall will focus on strengthening the roof-to-wall connections by installing additional wall anchors, cross ties, and support girders.

Marin Center to undergo seismic improvements thanks to grant funding

Seismic upgrades to the Marin Center Exhibit Hall building are scheduled to begin in mid-August and will improve resiliency and safety for the popular public facility. The construction is expected to take 10 months, targeting a June 2022 completion. No events will take place in the Exhibit Hall, adjacent meeting rooms, the Bartolini Gallery, and the Showcase Theater during construction.

The $2 million project at Exhibit Hall will focus on strengthening the roof-to-wall connections by installing additional wall anchors, cross ties, and support girders.

The Exhibit Hall is part of the larger Marin County Civic Center campus, owned and operated by the County of Marin. While the Civic Center, a national historic landmark, was designed by renowned architect Frank Lloyd Wright, the Exhibit Hall and Veterans’ Memorial Auditorium were designed by Wright contemporary Aaron Greene and others at the famed Taliesin architecture school founded by Wright. The Exhibit Hall is an epicenter during Marin County Fairs and typically hosts events year-around, but it has been used during the COVID-19 pandemic for a variety of emergency response needs.

The safety improvements, overseen by the Marin County Department of Public Works, will significantly reduce risk to building occupants in a major earthquake. The $2 million project will focus on strengthening the roof-to-wall connections by installing additional wall anchors, cross ties, and support girders.

The safety initiative is primarily funded by a $1.5 million grant from the California Department of Emergency Services and the Federal Emergency Management Agency. The state and federal grant was accepted by the Marin County Board of Supervisors on July 20, and the County will cover the remaining $500,000 of the project budget.

“These facilities provide an important cultural space for our whole community, and we want to make sure they are safe and sound for many years to come,” said Gabriella Calicchio, Director of Cultural Services.

The 2,001-seat Veterans’ Memorial Auditorium, Marin County’s largest indoor performance space, also will receive seismic upgrades starting in August 2022. Funding for that effort will be from the same sources as the upcoming Exhibit Hall project.