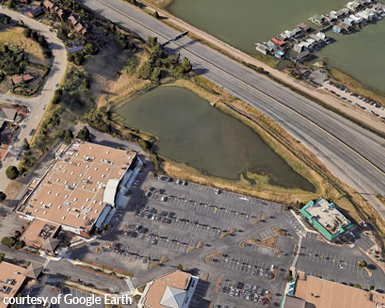 Storm and tidal-related flooding of the Marin City offramp from Highway 101, the primary access road for the Southern Marin community, has been an ongoing problem for many years. Overflow from the stormwater pond behind the Marin City shopping center and an insufficient drainage connection to the bay has led to chronic flooding that impacts travelers and nearby neighborhoods.

The flooding occurs during storm events and high tides, exacerbated by sea level rise, which can overwhelm the pond’s drainage system. The Marin County Flood Control and Water Conservation District Flood Zone 3 plans to enter the final design phase within the next few weeks to make improvements to Marin City pond’s drainage system.

On March 16, the Marin County Flood Control District Board of Supervisors will consider authorizing a $773,000 design contract. A recently awarded grant from the Federal Emergency Management Agency (FEMA) will cover $337,500 of the project design phase, with the remaining $435,500 coming from the Flood Control Zone 3 budget. Under this first phase, the District will work closely with Shore Up Marin City and Richardson Bay Audubon. These groups are leading a community driven design process for wetlands restoration of the pond, including improvements to public access and creation of a park.

“Based on predictions, like those shown in the 2017 Marin Shoreline Sea Level Rise Vulnerability Assessment, the eastern Marin shoreline could be facing more significant risks in the future,” said Roger Leventhal, Senior Civil Engineer for the District. “Projects such as the Marin City pond improvements are a step in the right direction to reduce near term flooding and provide the community and County with some extra time to develop long term plans for climate change adaptation.”

The first phase of work would address the drainage problems by designing and permitting a new culvert under Highway 101, a permanent floodwall along a portion of the pond and a new tide gate control structure. The project includes hydrology and hydraulic analysis, as well as biological assessments to help ensure effective flood mitigation and work with the Shore Up Marin City and Audubon design team. The scope of work would also include permitting, preparation of plans, and specifications for construction.

It is estimated that this design phase will be completed by March 2022, with milestones along the way presented at Shore Up Marin City meetings and Flood Control Zone 3 Advisory Board meetings, as well as updates and reports posted on the Marin Watersheds website.

Upon approval of compliance with the California Environmental Quality Act and permits secured from federal and state agencies, FEMA will release additional funds for construction. However, if estimated project costs for the construction phase are significantly greater than grant revenue, then the project would be held until alternative funding sources can be found.

The County of Marin and the District will continue to work with the community and stakeholders within in a larger process to address necessary flood reduction projects in Marin City beyond this first project with the pond. Future projects will need support from various infrastructure agencies and property owners in the area.